October 22nd 2017 – We were very pleased with the first in our new series of intimate gigs at Friends Meeting House.  The show – Crosscurrents: The Jazz Workshop featuring Geoff Simkins – went down really well, and the great acoustics of the room really made for a great experience for the band and audience alike. 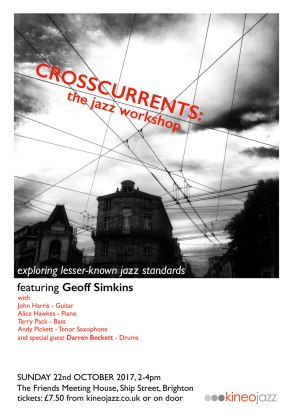 Previously we ran a series of gigs at the Basement in the old Argus Building in Brighton’s North Laine area. We had many great nights, which we kicked off with the fantastic Joe Lee Wilson supported by Remember April –

This concert is a welcome return to Brighton for US jazz singer Joe Lee Wilson who divides his time between homes in Brighton and Paris. As his band’s name (The Joy of Jazz) suggests, Joe Lee’s rich baritone voice personifies the life-affirming nature of jazz and blues.

Born in Oklahoma, seeing Billie Holiday perform in 1951 began his jazz odyssey. He studied in Los Angeles with Mario Lanza, spent time touring the West Coast and Mexico where he sang with jazz diva Sarah Vaughan, then moved to New York in the 60s where he worked with Sonny Rollins, Lee Morgan, Miles Davis, Pharoah Sanders and Jackie McLean. He was one of the originators of the New York jazz loft scene in the 70’s, performing and recording with artists such as Archie Shepp, Eddie Jefferson, Freddie Hubbard and Kenny Dorham.

Joe Lee has recorded many CDs during his long career. His most recent CD, I Believe (Philology) recorded in Italy with the Renato Sellani Trio, is a moving collection of classic ballads.

Another great night was with Dr Lonnie Smith –

What a fanstastic night we had! Dr Lonnie definitely lived up to his reputation – A master of the Hammond B3 organ who has been described as “a riddle wrapped in an enigma wrapped in a turban!”

We had some great pictures taken that night –